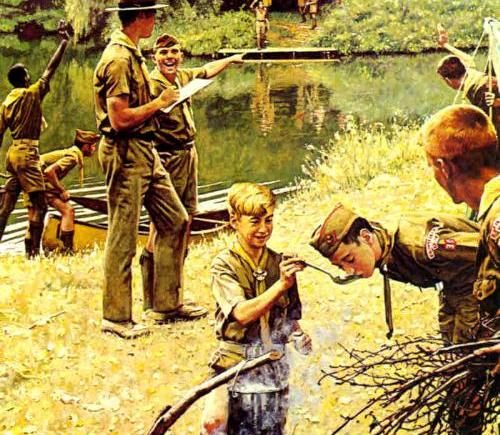 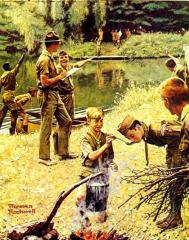 A good Troop Duty Roster assigns equal work for everyone in the Troop. Done properly it will help maintain order, everyone will know their assigned duties and no Scout will have to worry that they are doing more than their share. Everyone will be assured the opportunity to be an active member of their Patrol.

Trek Leaders: Should be familiar with Trek, Check weather conditions and report to SPL, Lead the Troop – one in front one in the rear thru throughout Trek.

A memorable Campfire requires planning. You can begin your planning process by reading Michael Lee Zwiers excellent article, Campfire Magic. Then, learn how to use the Campfire Worksheet portion of the Program Patrol Planner, download it, and put these ideas to work.

by Michael Lee Zwiers, from The Leader, June/July 1989

You’ve experienced it. You chose the songs, practiced skits, and organized everything into a program. Then you brought people together and began.

Everything went without a hitch. Participants sang the songs enthusiastically and laughed uproariously (or groaned painfully) at the skits. From there, the tone and pace of the program slowed until the final prayer was just a memory on the lips and in the ears.

As the dying campfire crumbled into ashes, campers reluctantly drifted off to bed. You stood before the glowing embers, soaking in their fading warmth and knowing that everything was just right. You’ve been touched by campfire magic.

Campfires like this are special but rare. They need not be. With a little careful thought and preparation, they can become the rule and not the exception. What follows are some hints and ideas from Alberta’s campfire leader training courses to help you plan a campfire program, deliver it smoothly, and bring the magic to it.

The structure of a magic campfire is like the shape of the fire. It builds up slowly from the lighting and opening to a peak, then subsides gradually to the closing as the fire burns down to embers.

The opening includes parading to the formal circle, introductions, the fire lighting, and a short, upbeat opening verse that sets the mood and guidelines for the fire and welcomes people to the magic of the experience. You may deliver it dramatically with arms in the air or holding a hand over the fire. You may involve participants by having them echo a line or, if you are using a “magic start”, asking them to concentrate to inspire the fire to light. Perhaps you’ll have a number of torch bearers light the fire as you declare it open. Build up from the opening with some well known songs, a few rounds, some fun songs, some action songs, a game and stunt or two and, at the peak of excitement, skits and yells. Bring down things slowly with a few rousing songs, some quieter songs, a story or Scouter’s Five, a spiritual song or two, vespers and taps, and a closing verse.

You might include a short Scout silence before the verse or invite participants to pause for a moment to listen to night sounds or reflect and be thankful. Many campfire leaders end the verse with “I now declare this campfire closed” but, as Lewis Carroll once said, “They don’t seem to have any rules in particular; at least, if there are, nobody attends to them.”

Before the event, review campfire etiquette with your gang. The campfire circle is sacred and always quiet before and after the fire. Prohibit flashlights from the circle. Make a no-talking rule. If wood needs to be added to the fire during the campfire, only the Keeper of the Flame may do it. Applause takes the form of yells, not clapping.

Choose a magic site (on the lake shore, etc.) and, however you start it, keep the fire a reasonable size. Fires that are too big can take away the magic. To enhance the mystique, you may want to add ashes from your last campfire to this new one. And, if you clean up all the coals and other signs of festivity before the next morning, your campers will always think of the campfire site as a special place.

Keep the program short. If you will offer refreshments later, plan time so that it won’t break up a good program. For the greatest success, involve as many people as possible in the campfire as leaders of songs or yells or players in skits or stunts. If you can, audition songs and skits ahead of time to avoid any possible problems, either with difficulty or poor taste. Choose songs you enjoy and know your young members enjoy. Stick to the familiar rather than trying to teach a new song, unless it is something really easy, repetitive, and fun. Be sure you include parents and special guests as well as campers. Avoid song sheets or books, a sure way to destroy atmosphere as participants turn their backs to the fire in hopes of catching some light to read the words.

Look for audience feedback. Are they singing and taking part or looking bored? Keep it alive. If a song is too slow, speed it up. If it is really dragging, simply end it and move into a “no fail” song you have up your sleeve. Set a brisk pace with minimum breaks between songs. Sometimes campers become so caught up in the fun they want to sing every song they’ve ever heard. You have to be firm, but remind them they can have their own sing song and put in all their favorites at their tent site after the formal campfire is over.

If someone brings along a musical instrument, ensure that it enhances the experience. If it begins to detract by becoming a “solo” act because nobody knows the songs or they are all slow ballads, stop the player firmly but politely.

Announce the next act or song at least one act ahead so that the people involved have time to prepare. If you know who is on next, you can simply whisper in an ear to alert them. Keep a set of quickie yells, stunts, or songs on hand in case a person or group is not ready to perform when the time comes or you need to stop a performance for some reason.

For example if, despite your screening, a group begins a skit or stunt in poor taste, stop it. Indicate simply that it is not appropriate and go on with something else. After the campfire, talk with those involved to explain the reason for your actions.

Once you’ve eliminated the problem of poor taste, skits or stunts can still go wrong if the players speak too quietly or position themselves badly (e.g. with backs to the audience). That’s another good reason for pre-campfire auditions. To work well and safely, a skit needs good light. The Keeper of the Flame can add small sticks to a dim fire. You might also provide pot lights or kerosene lanterns, as long as they aren’t so bright they detract from the atmosphere.

Keep a firm rein on proceedings to avoid things like poorly timed announcements that can destroy the magic. If some participants begin to cause a distraction, you can do one of two things. Signal another Scout to tap them on the shoulder and talk quietly to them. If you stop a campfire to lecture noisemakers, it’s an automatic downer.

A campfire may be magic, but there’s no trick to it, just good planning and some common sense. At the many campfires in your future, may you often be touched by the magic.